How we created a dream lifestyle property with Hamlan 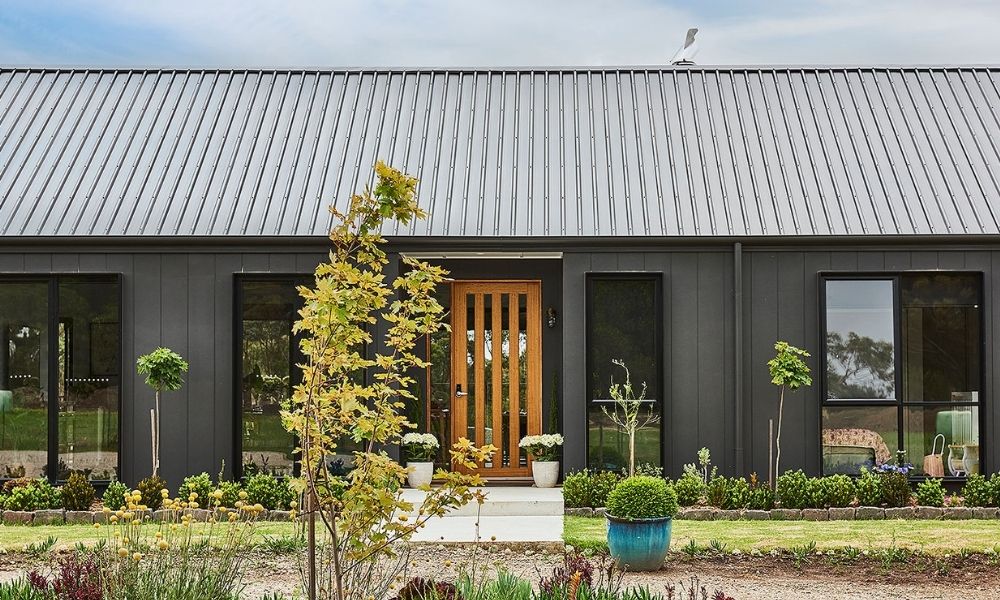 Take a drive out to the Surf Coast locality of Paraparap and you’ll find traditional farmhouses typical of any farming area across Victoria. But at George and Liz’s Paraparap farm you’ll find a home that is anything but traditional.

George and Liz have spent years dreaming up the lifestyle property that they now call home. Their new home is a sprawling homestead custom designed and built by Hamlan. Inspired by the striking modular barn-style homes found across New Zealand, it has all the modern conveniences you would look for in a new luxe home, including a pool and guest wing.

This is a home that many could only dream of, however the success for George and Liz is not only the beautiful home they have created for their three children, aged 10, 7 and 18 months, but the new country lifestyle they now get to enjoy.

George comes from a farming family based in Nerrin Nerrin at the foot of the Grampians. Liz has grown up in and around the Geelong region and returned to the area following a few years in Noosa and London to bring up the children close to the beach. So Paraparap was the ideal location for their own farm.

“I’ve been a farmer on-and-off for 10 years and have always worked in agriculture,” George says. “Paraparap is close to Melbourne, close to the coast and close to my family’s farm, so it’s all very convenient to us.”

“George surfs and we’re trying to get the kids into surfing. We’re about 15 minutes from Torquay and Anglesea so it’s a really unique combination of coastal and rural whilst still only an hour and twenty minutes from Melbourne,” says Liz.

George and Liz sought out the land, a little more than 200 acres, eight years ago when it was “just a block” with a few sheep and some cattle. George says the ability to supplement your regular income from the land complemented their new lifestyle.

“I was facing a few decisions in my career, so decided I wanted to use my farming experience in some sort of format. I tried garlic growing, and supplying zucchini flowers to high-end restaurants in Geelong and the Bellarine, restaurants such as Igni, Alma and Zigfrids,” George says.

“There wasn’t enough demand for them in Geelong in the end so I went back to what I know which is livestock and a little bit of hay and cropping.”

Now, this working farm has Angus cattle and sheep plus hay and silage for their own use. They are utilising the land to sustain their food needs as well as keep their freezers stocked with lamb. A goal when living the ‘off grid lifestyle’.

Designing a dream home with Hamlan

At first Liz and George had imagined their new home as a more traditional Australian farmhouse —think white weatherboard cottage with wraparound verandah.

“We got married three years ago and went on a honeymoon in New Zealand and fell in love with all the black barn-style properties we saw in Queenstown in the South Island,” Liz says.

“We kept our floorplan the same but got rid of the verandah and decided on a really flat facade. We worked closely with Hamlan and they helped us come up with the idea of the hooded windows just for a little bit of dimension on the front. We liked the idea of a flat frontage, flat barn with the high pitched roof.”

The home’s raked ceilings were inspired by The Stables of Como in South Yarra, which also has a luxe farmhouse feel.

“High ceilings were a must and having a bigger house was important,” George says. “Also having a garage plus shed, and water catchment as we’re not on town water so we needed that water catchment area to build up our tanks.”

The pool, George says, was Liz’s non-negotiable must-have as she loves entertaining and now never has to leave the house as everyone wants to come for poolside lunches and swims.

“The outdoor entertainment area was really important with the outlook we’ve got, which is north facing. We also needed somewhere for guests to stay so we included a guest wing,” he says.

“We have clearly defined the two ends of the house with a kids zone at one end and our room at the other separated by the main living, which opens up to the outdoors and pool area” Liz says.

“We love the kitchen, the kitchen bench is gorgeous. We had a custom-made herringbone, parquetry benchtop, which I love. It’s my favourite thing in the house. We like to cook and we like to entertain.

“We’re about to come into our first summer here so we’re looking forward to using the outdoor area a lot. The living area opens up to the outdoor entertainment area and the pool so everything is close and easily accessible.”

However, with this home, it’s not all about the aesthetics. Its location provided some unique challenges.

One of the biggest was bringing power to their block. The roadblock led George and Liz into making a big decision— the decision to power their home entirely with solar energy. This home is not connected to the electricity grid or the main water supply, which was fitting for a farm that gained its name “Off Grid Farm” before the idea came to fruition.

“To bring power in from a neighbouring farm it would have cost about a quarter of a million dollars,” George says. “We were already called Off Grid Farm, which was convenient when Hamlan suggested we could custom design a solar system with their providers CSR Bradford. We jumped at the chance to get into those discussions.”

The home runs off the grid, armed with a solar power system including batteries and a backup generator that was custom designed by CSR Bradford along with a water catchment system that currently consists of two water tanks and a dam.

The threat of bushfire was another element of the build that needed special attention.

“We’re in a bushfire zone, so our home needed a lot of the materials to meet its high BAL (Bushfire Attack Level) rating and keep us safe,” Liz says. “All of the cladding was selected with bushfires in mind. All the windows are double glazed to keep all the temperature stable. They are all things you have to think about when building an off grid house.”

Building a dream home with Hamlan

Both Liz and George agree that Hamlan’s great communication and personalised service really made the building experience a positive one.

“Hamlan’s excitement matched ours,” says Liz. “They were happy to take on the challenge to build a big off grid house in a rural area. We’ve had no complaints!

“Hamlan is a flexible builder and they have good onsite designers so you don’t have to worry about paying for an architect. And they have some great floorplans.

“We had a really great site supervisor who was amazing. He was great from the get go and we are still in contact with him today.”

George says Hamlan’s attention to detail was a standout for him.

“If there’s a problem their phones are always open,” he says. “We’ve found them great to work with. The Hamlan team have really taken care of us and I’d encourage anyone to go through Hamlan for any sort of build.”

When George and Liz faced challenges with bringing power to their property in Paraparap they jumped at the chance to create a home powered entirely by solar energy. Their new home is a sprawling homestead custom designed and built by Hamlan. Working closely with Hamlan, they now are happily living in their new home—completely off the grid—meaning this property is not connected to the electricity grid or main water supply.

Inspired by the black barn-style properties you’ll find in Queenstown, New Zealand, this modern farmhouse has all the conveniences you’d want in a luxe modern home. And as a working farm with Angus cattle and sheep, George and Liz have managed to create work for themselves that completely complement their new lifestyle. However, they are first to admit there’s still more to learn about living a true sustainable lifestyle with the family exploring more ways to be more self-sufficient.

George and Liz loved the building process with Hamlan saying it was their communication, personalised service and attention to detail that they valued most.

“Hamlan’s excitement matched ours,” says Liz. “They were happy to take on the challenge to build a big off grid house in a rural area. We’ve had no complaints!

“We’ve found them great to work with. The Hamlan team has really taken care of us and I’d encourage anyone to go through Hamlan for any sort of build,” George says.

Talk to us today

about your dream home.

What’s the best material for your home’s façade? 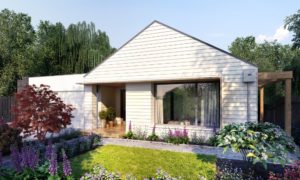